How Elements of Control Affect the Valuation of a Business Interest

More to Business Valuation than Meets the Eye 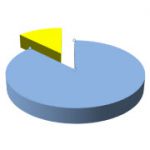 Control is important to investors.  And they usually will pay less for a business interest that lacks control over key decisions. As a result, the old adage “the whole is greater than the sum of its parts,” can — and often does — apply to business valuations. This article provides an in-depth example to explain how control affects the valuation of a business interest.

When a publicly traded business is acquired in the whole by an outside buyer, it is often purchased for a greater value on a per share basis than the market value of individual shares. Of course, part of that difference could be traced to the synergistic value between the buyer and the seller. However, it is also due, at least partially, to the fact that the publicly traded shares are all minority interests in the company. This lack of control results in a diminution of the value of the shares.

Consider the example of a private company with five equal shareholders owning 20 percent each. If we were to add the value of each of the 20 percent interests together, they would not equal a 100 percent value of the equity of the company. Why? Because each interest, standing alone, isn’t a controlling interest.

Once again, this lack of control means that the interest is less valuable than an interest where you could exercise control. For example, with a controlling interest, you can set compensation, determine dividends or other distributions, and affect many other actions that a minority shareholder can’t control. Minority interests in a private company also might be subject to discounts for lack of marketability, because they cannot be readily sold in the marketplace.

Would You Pay More Than An Interest’s Pro Rata Share of the Entire Business?

Now suppose that there is one 60 percent owner and four other owners with 10 percent each. You might be inclined to say that the combined values of these five interests should equal 100 percent of the equity value of the company. However, this would require that the 60 percent owner to pay more than the interest’s pro rata share of the entire business’s fair market value on a controlling basis. In other words, the owner would pay a premium to control the business.

For illustrative purposes, let’s assume that the 10 percent interests warrant a combined discount of 30 percent for lack of control and marketability. That would mean their interests are each worth $70,000 on a minority, nonmarketable basis.

As this simple example show, the whole can often be greater than the sum of its parts when estimating fair market value. In the world of business valuation, while seemingly counter-intuitive, this logic makes perfect sense.

Please contact Gryphon Valuation Consultants, Inc. about the elements of control and how they may affect a particular business valuation.

More to Business Valuation than Meets the Eye